Venice - Shopping at the Rialto market

On the way in the Sestiere San Polo

In this article we will focus on the San Polo district, a lively neighbourhood around the Rialto Bridge, popular as a photo opportunity, and the Rialto market, which offers stalls selling fish, fruit and vegetables.

Of particular interest are: 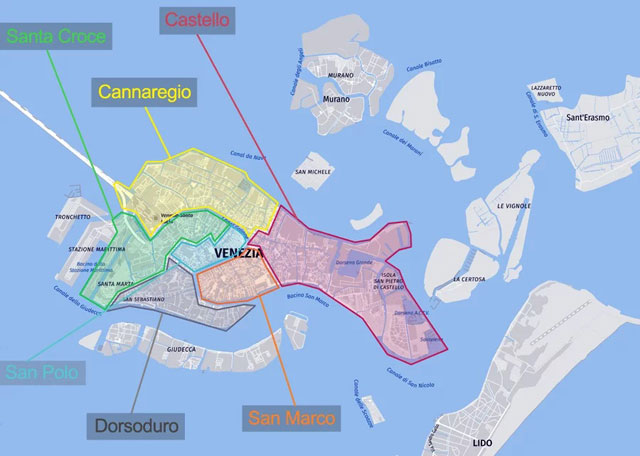 Around the Rialto market

Rialto in the district of San Polo, on the island of San Silvestro, is one of the oldest island settlements in the Venetian lagoon, which is particularly interesting both from a historical point of view and in terms of the environment and collective social life, and on which the city's market area is located. Once the city centre of Rialto was located on the western bank of the Grand Canal. At this point, first a pontoon bridge and then a wooden bridge were built, which were later replaced by the current Rialto Bridge was replaced, whose beautiful stone construction with a single arch of Antonio Da Ponte was built in the last decades of the sixteenth century.

San Polo is one of the six districts of Venice and lies southwest of the Grand Canal on the great loop formed by it. The name of San Polo derives from the ancient Church of San Paolo Apostolowhich used to have its own parish, but is now part of the parish of Santa Maria Gloriosa dei Frari.

In 2009 San Polo had about 5022 inhabitants, distributed among the parishes of San Silvestro, San Cassiano and Santa Maria Gloriosa dei Frari.

The Sestiere San Polo is with approx. 34 hectares the smallest sestiere of the city, but hosts the oldest part of Venice and the second largest square, the Campo San Polo. The heart of the Sestiere is the Rialto with the market of Rialto (Mercato di Rialto), the commercial centre of the city. The name derives from "rivo alto" (meaning "high bank") and at the beginning of the settlement and urban development included a group of small islands, because Isole Rialtine, which formed their center around the Rio Businiaco. This part of the city was also the site of the first seat of government in the 9th century. Unfortunately, little remains of the original buildings after the night of the fire on January 10, 1954, except for the church of San Giacometto.

Around the market of Rialto 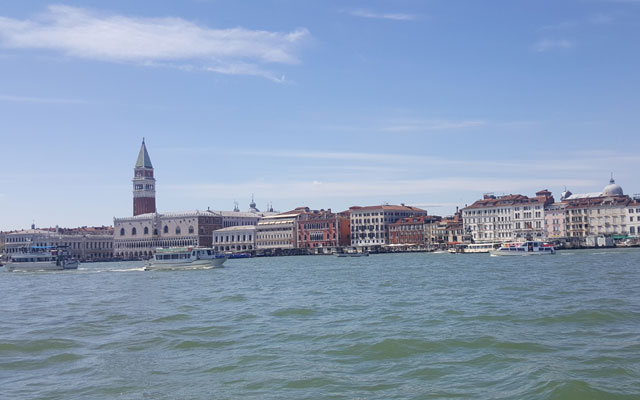 Our Venice - Part 1 Since we live in Italy and we don't have far to go to Venice, it is not too far that we

As explained in our first post, Venice is easy to get to.
The usual places to go are Piazzale Roma and Santa Lucia train station. From here you can take the vaporetti (water buses) towards the different parts of the city.

The islands of San Polo can be reached via various stops on lines 1 and 2.

To do the tour mentioned below, it is best to drive from Piazzale Roma by which Vaporetto line 1 or 2 along the Grand Canal to the San Silvestro stop.

From Tronchetto from the city centre, either with the People Mover or with the Vaporetto line 2 to Piazzale Roma and from there as with line 1 to the stop San Silvestro.

On this tour we visit the two islands of San Silvestro and San Cassian and visit, among other things, the market of Rialto.

At the San Silvestro stop is where our tour begins.

From the San Silvestro pier we'll go through the underpass first. Sottoportico de la Pasina and then follow the path further to the Campo San'Aponal with the church of the same name, which is used as a municipal archive. From the Campo Sant'Aponal you have the possibility to go into the street Rughetta del Ravano, or in short Ruga Rialto, the name of which comes from the French word "rue" and refers to a long street or "calle" where many shops can be found.

We walk a short distance along the Ruga Rialto and then turn right into the Rio Terrà and follow it to the Church of San Silvestro and to the campo of the same name. Unfortunately, the church of San Silvestro has five steps at the entrance and is therefore not barrier-free to visit. We follow the Rio Terrà to the left and shortly after we pass the church of San Silvestro on the right in the direction of the Road Riva del Vin. Arrived at the canal we can admire the Fondamenta del Vin. Here were once the oldest houses and Byzantine "Fondachi"of which some are still preserved in this place. On the opposite side at the Canal Grande one sees the fascinating Gothic-Renaissance facades of the Palazzo Ca' Farsetti and the Palazzo Ca' Loredan, currently the seat of the Venice City Council. Also the Rialto Bridge can already be seen.

We turn left and continue in the direction of Rialto Bridge. Shortly before the Rialto bridge we turn left again into an underpass and into the street La Madonna Street (one street after Calle dei Cinque). Here you will find a Barbican made of Istrian stone with the inscription "PER LA IVRIDCIOM DI BARBACANI".

This architectural element, which can also be made of wood, is very common in Venice and supports an overhang of the first floor slab, allowing the upper floors to be built with a larger footprint without reducing the width of the streets, which are also thus partially protected from the rain. The Republic of Venice set a maximum limit for the projection of the barbican for reasons of safety and stability of the buildings, and for illustration this sample barbican was built.

At the end of Calle de la Madonna we reach the last section of the Ruga Rialto, which here is Ruga Vecchia San Giovanni is called. We offer right into the Ruga and after a few meters on the right side we see a wrought-iron gate and shortly thereafter a Bell tower from the fourteenth century, which became the Church of San Giovanni Elemosinario heard.

This is an unusual building, built before 1071 with a floor plan in the shape of a Greek cross. Destroyed by the fire of 1514 and subsequently rebuilt by Scarpagnino, the church houses important masterpieces of the Renaissanceincluding the altarpiece of San Giovanni Elemosinario by Titian and a work by Pordenone in the central dome.

The entrance to the church has 5 steps, the first of which are 9 inches high and the remaining four are 13 high.

Campo delle Beccarie - The beginning of the Rialto market

At the end of the Ruga Rialto we turn left into the street Ruga dei Spezieri the street of the spice traders and a short time later we reach the Campo delle Beccariewhere you will find a busy market in the early hours of the morning.

The street of the same name leads to the Campo della Pescaria and then quite a bit further to the Campo Bella Vienna. The first houses a Fish Marketwhile the second Flowers, fruits and also Venetian handicrafts has to offer. If one crosses from Campo Bella Vienna the Fabbriche Nuove on the left side, you reach the landing stage Rialto Mercato.

The old part of the building on the right side, the Fabbriche Vecchie, is the seat of the Court of Venice. Through an underpass in the Fabbriche Vecchie you reach the Campo San Giacomo di Rialto with the church of San Giacometto. The latter, built between the 11th and 12th centuries, is considered the oldest in Venice and escaped the fire of 1514. The beautiful façade has a large clock (c. 1410) above the small Gothic portico in stone and wood, the last original remnant of the fire of 1514. The main entrance and the side entrance of the church have five steps. The church now houses the Museum of Music.

The Campo is surrounded by a long portico, the Banco Giro, circled. Bankers, merchants and traders used to meet here and hold their contract negotiations. On the opposite side of the church is the Colonna del Bando, in the vernacular because of the hunchbacked figure with a large porphyry staircase on his back also called Gobbo di Rialto called. This staircase or figure was formerly used to read out announcements, proclamations and condemnations.

Behind the Fabbriche Vecchie, across the portico of the Banco Giro, you reach the Campo dell'Erberiawhich overlooks the Grand Canal, one of the most impressive places in Venice. In the numerous taverns called bacari, it is best to enjoy a good glass of wine and cicchetti (small snacks served with the drinks) while admiring the view of the finest palaces along the Volta de Canal (the curve of the most beautiful waterway in the world) enjoys.

After this view, we go back to Campo San Giacomo, leaving behind the many small shops and entering the Ruga degli Orefici, a long covered street once famous for its gold and silver workshops. At the foot of the Rialto Bridge, on the left, is the Renaissance Palazzo dei Camerlenghi, seat of the Corte dei Conti (Court of Auditors) and to the right of the Palazzo dei Dieci Savi from the 16th century, seat of the Magistrato alle Acque (water authority) and the Genio Civile (civil engineers).

From Campo San Giacometo we go back along Ruga dei Oresi towards Ruga Rialto and turn left into it. After a few meters we turn right into the Calle della Donzella off. We follow Calle Donzella to the right and reach the Campielle dei Sansoni. At the end of the road we meet a small bridge that leads to the street Ca'Raspi. The bridge has been made accessible to wheelchairs by means of a ramp. From here, if you continue straight on, you reach the Calle dei Botteri. If one goes now first right and immediately the next street left, one reaches the Campo San Cassian with the 17th century church of the same name, the entrance of which has a step that can be easily negotiated.

This is where the tour ends. Who would like, can visit now still on own initiative this beautiful part of San Polo or returns either to the Rialto Mercato pier or return to San Silvestro pierto discover another part of the city.

which is also part of the San Polo district.

So check back or better yet - subscribe to Wheelchair Tours on the social media channels! 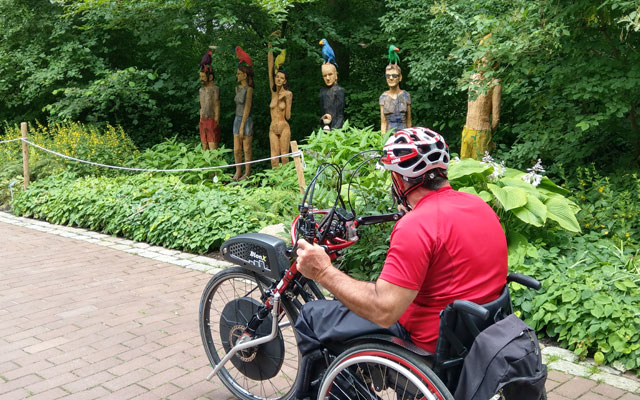 Along the Werse cycle path in Münsterland by handbike 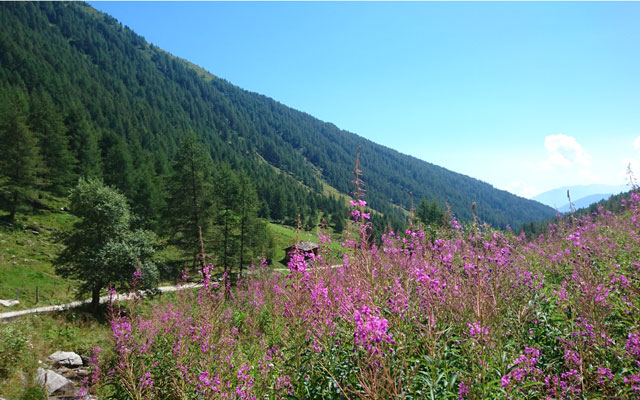 7 tips for sustainable hiking - whether with or without a wheelchair

To travel is to live - to live is to travel.​

Powered by SABRINA - Your language consultant

As you may have noticed, we are currently in the process of translating our website and adding more languages. Since this is technically somewhat complex, not all pages are currently available in all languages or only in one language. Translation by an AI (artificial intelligence) is available.

Due to the installation of the translation technology in the website, some formatting has unfortunately broken. We try to restore these as soon as possible.

Thank you for your understanding!